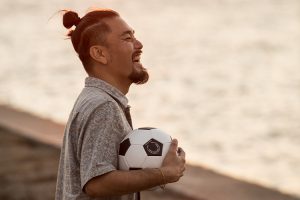 Akazuchi rapper RITTO is a rapper who represents Okinawa. He has a sure sense of rhyme which was honed from freestyle rap battles, a unique flow, and a powerful, overwhelmingly persuasive voice. He is strongly trusted by the hip-hop heads all over Japan, and he is one of the most important rappers in the Japanese hip hop scene.

We were successful in hearing his story in his hometown, Naha, on Kokusaidori Street regarding what he sees from Okinawa, the southernmost of Japan’s islands. 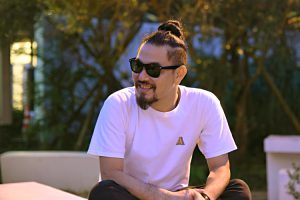 ◾️First of all, how did you get into hip hop?

◾️At that time, what kind of artists did you listen to?

I did not listen to anyone in particular, but I watched most songs on MTV at the time. Also, I tried out some of the songs at Tower Records, and me and my friends would lend albums to each other. Hip hop was like moving and hanging around with friends and saying something like “There is something that sounds this cool!”. (lol)

◾️I see, so the “crew” kind of friendship suited you.

I think so. I think having played soccer also had a major impact. I think how you play as a team is reflected on how I move as part of a crew even to this day.

◾️So what was the real reason you started to rap?

I always listened to rap as I played soccer, but then I injured myself during practice when I was in my second year of high school. I guess that kind of made me a bit heartbroken. Because I could not play, the irritations and frustrations I felt piled up and that is why I kind of thought of doing rap, which became steadily more interesting for me. I liked soccer, but it was like I found something that I liked more than it. 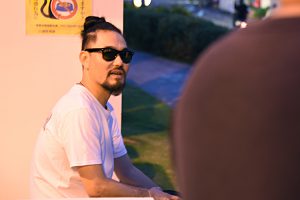 ◾️I would like to ask a bit about your production – when do you write your lyrics?

I often write when I get up.

◾️When you have just woken up?

Yes, yes, I often write just after I’ve woken up. If a word comes to mind, then my thoughts go all the way from there.

◾️Do you mean that a phrase comes to mind first?

Yes. For me, I think maybe it is more often the case that phrases come to mind first. It is like when one phrase comes to mind, I try to find the words that follow it. When I first started rapping, I was often told that the meaning does not make sense or asked “what on earth are you saying?”, but these days I do not get told that.

◾️Do you think a lot about whether the meaning makes sense or not?

I feel that it is important to write lyrics that are easy to understand, but I also feel it is important for the writer to throw questions at everybody. For example, I get really happy when people ask me what was the meaning of a certain lyric. I think it is somewhat different to coherence and there is something there that people get hooked by. I think it is interesting that through this communication is born.

◾️It is not good enough to be easy to understand, is it?

You can just ignore this, but I think it is important that people get hooked by it like by wondering what something was or being curious about a word. So, similar to how DJs and beat makers select samples or make mixes of the songs, I sometimes make my own words.

Exactly. I think that is one of the most interesting things in rap. I think it is natural that these days rappers appear in educational programs for kids – words are interesting.

◾️That is true, there are many of those these days.

I think that hip hop itself has gotten more familiar for everyone. I think that is a very good thing.

◾️What does the hip hop scene look like from your perspective?

I think that it has gotten more energetic. I think there are also more people. Techniques are getting more sophisticated and there is an atmosphere that you can do it even if you are young, but I also think that there are more things our generation can do. I think that the more rivals you have, the more chance you have of broadening your stance and field. If you can have multiple choices and not be stubborn about your own ways, you may be able to create sessions with many different people, and it may broaden your world of music. I think the Japanese hip hop scene would become even more interesting than how it is now if individuals can aggressively make efforts to become bigger.

◾️So, what do you feel is the hip hop scene like in Okinawa in such an environment?

There is sky and sea anywhere, but I think everyone else is beginning to realize even without us saying so that Okinawa is different in that respect. The more that young people from Okinawa go to different regions, more people who saw them would come and visit Okinawa afterwards. So, there has been less “it’s because its from Okinawa”. There have been less things like “it is popular because it is from Okinawa”.

◾️That is true. There is an acknowledgement that Okinawa is not outside the hip-hop scene, but it is actually one of the most important cities in Japan for hip hop.

When I said that a rapper from Okinawa has arrived, everybody came happily to see us and said things like “it was good”, “it made me feel happy”, “thank you”, and “I will come back”, and they really did come to visit Okinawa and some even moved over here (lol)

◾️I understand. Okinawa was too comfortable.

Maybe it is our fault the population of Okinawa increased (lol)
Within music circles, there are many people who moved here, but I think it is very important to come across new ideas and share them, and to go to different cities in Japan with them, and to go to Asia with them.

◾️Go to Asia with them?

More people around me are going to Asia, and I often hear them talk about it. There is creator called MMM who is a crew member of stillichimiya from Yamanashi who often takes videos of me and he is always going to Bangkok and Southeast Asia to shoot films there and apparently it is not “like Okinawa” over there, but it is the same as Okinawa in terms of spirit and history. 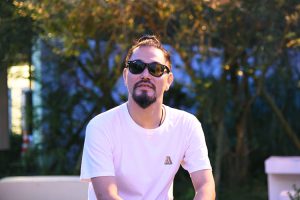 Also, an artist from the Philippines called Red Eye came to do a live concert at our club called LOVEBALL and when I asked him “so where do you usually do a concert at?” he casually said “I often do it at a place with a capacity of 500 people and it would be full even on weekdays”. From our perspective it was unbelievable! (lol)

Similarly, I hear about that kind of excitement over there and there are more and more Japanese who are active over there. When I think about it, Okinawa is close to Taiwan, Shanghai, and there is even a direct flight to Bangkok, so it is actually closer than you think. That is why I think the hip hop scene will not only be in Japan, but will increasingly move towards Asia.

◾️Historically speaking, Okinawa has been ideally positioned for such activities.

I am simply interested in how my words and music would be received by those people. My senior who is a reggae selector who often works in Europe says that the Philippines are really something else. He says to me “don’t say anything and just go”. He says “it would really be suited to you!” (lol). I have no idea what evidence he has to say that, but you do have to go if somebody says all that to you.

◾️That is something to look forward to.

People around me have been there several times, and talks are going smoothly so it is gradually taking shape. Maybe if I go it would suit me so well that I would not come back for half a year (lol)
If I go there I think it would make it easier for other hip hop artists from Okinawa to go as well, and we can spread the moves and words gained from there and the people who received them would think about us and about Okinawa. Hopefully, when we meet again we can talk about many different things.