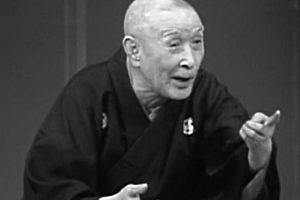 Rakugo is jazz. Both are forms of art that involve the performer arranging a standard piece according to his own interpretation, turning it into his own piece. Their innate charm lies in improvisation and the nature of being performed live, and what is considered “cool” in jazz is expressed using the word “iki” in rakugo.

Among the great men of rakugo, there is someone called Bunraku Katsura the Eighth. His skills, that have been delicately refined over many months and years, are as accurate as a precision instrument, with not an ounce of disorder. His craft is perfect, much like that of Buddy Rich’s drumming.

However, In late life, this man, who settles for nothing less than perfect, forgot a character’s name in the middle of a performance in front of his audience. Silence filled the air as everyone was still with disbelief. After a moment of silence, he gave a deep bow to the audience, apologized, saying, “I am sorry. I will study it one more time. ” and quietly left the stage.